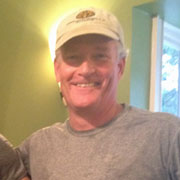 A former college soccer player, Charles Hodges took up distance running, triathlons and long distance cycling as an adult. While the years of training and competition provided memorable experiences, they also created muscle imbalances, misalignments and disk disease. As a result, Charles had back surgery in late 2012.

Charles headed back to the roads and the pool shortly after surgery. Unfortunately he reinjured himself, and his back pain quickly returned. Not only was he unable to return to training, but the injury impacted his profession as a landscape architect. Facing a second surgery, Charles came to the center on the advice of his wife, Rosemarie, who is a client.

“When I first started I had no feeling in my left leg. I couldn’t stand on my left foot and I was in constant back pain,” says Charles. “Lauri set up a program for me to address some weakness and imbalances in my muscles. My goal was to get strong enough to be able to do the group classes. After the first private pilates lesson I was able to stand on my left foot. After the first week the back pain started to dissipate. After six weeks of twice weekly private lessons, I was ready for group classes.”

Charles now attends Mat Pilates, TRX and yoga classes. “The best thing about the center is the staff. They are very conscientious, well educated and they understand and care about individual client’s needs.”

Charles gets to the studio three to four days a week and his injury is “about 90{80a315e4dd37a71f75f7e4ff992bdaf41eff37bb476f6938f7a39849305fe965} recovered and getting stronger every day.” He is part of our growing “men’s group” on evenings and weekends. “TRX, yoga and Pilates are a perfect combination for guys who want to avoid injuries, improve flexibility and increase strength,” says Charles. He’s brought several friends with him who have become believers.